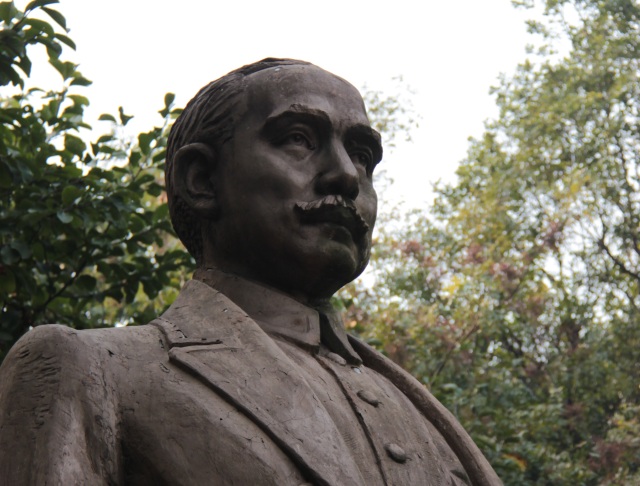 Aside from the Nanjing massacre memorial, the city has a number of less morose attractions. The Grand Canal, a major commercial waterway running from Beijing to Hangzhou, passes through the city, as does the great Yangtze River. There’s a few halls to the people’s heroes; and there’s a zoon. But Nanjing’s major tourist draw – and the reason I was visiting — is the mausoleum of Dr. Sun Yat-sen, the father of modern China.

Sun was a major political figure in the earlier part of the twentieth century, pushing for reform in China. He was a revolutionary, and the Chinese like revolutionaries. In 1911 Sun helmed an uprising that overthrew China’s last monarchy and ushered in a Chinese republic. The new nation’s capital was established in Nanjing.

The Republic of China was short lived, with warlordism, infighting between China’s Kuomintang (KMT) and Communists (CCP), and the Japanese invasion in the 1930s hampering any real democratic progress. The doctor died in 1925 before stability could be established in the country – the CCP achieved that in 1949 but left Sun’s vision out of their equation for a New China.

The memorial hall sat atop a hill, hundreds of steps leading to its peak. Inside was a large statue of Sun sitting Abe Lincoln-style, looking out over China. Sun’s marble coffin was in a separate room that was closed off.

As I left the memorial hall I too looked out over the landscape. Gentle hills, green forests and no signs of the city. It was peaceful – a bit too peaceful actually. I somehow felt that this had been done on purpose; that the communists had stuck Sun out here in the hills to hide him.

Sun helped establish a new China, but he was also the founder of the KMT, the political arch-nemesis of the CCP that fled to Taiwan after being defeated in a civil war in 1949. Today, CCP historical revisionists conveniently leave out or distort the fact that Sun embraced democracy — and not the kind with Chinese characteristics – which exists in Taiwan but not the mainland.

Today, people come to pay their respects to the doctor. Many leave flowers, others just come to bow or say a quick prayer.